There was a kingdom in the clouds.
Cradled too close by mountain peaks,
the populace throbbed at the brim.
Houses climbing cliffs like animals
escaping. Each year rooftops rested
closer to the stars; each year tunnels
rooted deeper into stone.

Tremors shivered through glass and steel.
Engineers and architects calculated
loads in the margins, torque and sway.
Where the air is light, snow is heavy,
and avalanches are netted like beasts.
Oracles warning of volcanic eruptions
were the madmen shouting on street corners.

The Queen had begun to dream of fire.

Dawn is creeping pink
but the valley is still in twilight.
Once the sun rises, the whole kingdom
will glitter like crystal.
My jewel-box, thinks Queen Karina
as she looks out each morning
from her bedroom in the seventh tower.

She begins to sing softly.
“Mirror, mirror, on the wall,
who’s the fairest of them all?”
It is a catchy tune, bitter and funny.
She presses an injector to her thigh,
inspects the wound. A purposeful breach.
No cure, only pinpricks and time.

The Sickness encircles the kingdom
like the arms of a wit-sick parent.
Poison in the milk. Long before this rot,
children have withered in the womb.
Long have the people been turning
to stunted alpine trees, their eyes
all the same color: rain about to fall.

Only the princess pristine,
Rose, that daughter of the lowlands.
Skin like river-clay, hair
like thunderheads over the floodplain.
Snow-white, the people jeer. Untouched
and untouchable, she watches them die
from the turret. The people riot.

Somewhere, someone is starting a fire.

Karina lifts the veil from her mirror,
surveying the wreckage of her face.
The left cheek melting away from bone,
red shining flesh beneath the eye.
Sores blossoming, chin to nipple.
She chuckles, thinking of verses
once written in praise of those breasts.

The Queen puts on her mask
and strides to the throne room.

Tammy Bendetti lives, works, and drinks too much coffee on Colorado’s Western Slope with her husband and two small daughters. She completed a poetry workshop with Wyatt Prunty at Sewanee: The University of the South, and received a Bachelor of Arts in English Literature from Colorado Mesa University. Her poetry has most recently appeared in Calliope and Grand Valley Magazine, and is forthcoming from Right Hand Pointing. She is currently building a secret room under her stairs but does not plan to keep any wizards in it. 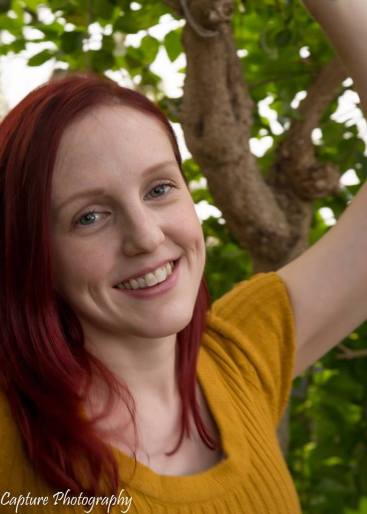 Tammy Bendetti  lives, works, and drinks too much coffee on Colorado’s Western Slope with her husband and two small daughters. She completed a poetry workshop with Wyatt Prunty at Sewanee: The University of the South, and received a Bachelor of Arts in English Literature from Colorado Mesa University. Her poetry has most recently appeared in Calliope and Grand Valley Magazine, and is forthcoming from Right Hand Pointing. She is currently building a secret room under her stairs but does not plan to keep any wizards in it.

Who is your favorite female identifying written character and why?

Zora Neale Hurston’s Janie from Their Eyes Were Watching God is a force of nature. Just to keep moving after so much hurt and disappointment is admirable. But instead of merely surviving, she keeps shining out love. She’s so full of courage and a willingness to feel everything all the way down to her bones. It’s no wonder Hurston had Tea Cake swallowed by a hurricane, just to give balance. Janie’s heart was swallowing her whole all along.

What literary work by a female identifying writer had the most effect on you as a writer and/or person?

My father used to read to me and my brothers every single night. He didn’t stick to kids’ books, either. We read Lord of the Rings with a dictionary open on the coffee table! When I was seven, we read Anne of Green Gables by Lucy Maud Montgomery. I found it so comforting to think that I could be strange, I could be passionate, I could be very alone at times, and all that could ultimately be an advantage to me. I was an odd duck as a child, and spent a lot of time by myself. If I’d felt compelled to assimilate, I might have lost my voice.

How did your poem Grundy County come about?

For the first three years of college I attended the University of the South in Sewanee, Tennessee. It’s like a little heaven. Lush green forest and a handful of graceful stone buildings. The teachers are brilliant, the students are engaged, and the sense of community is strong. But it’s a heaven for the wealthy, and I have the debt to prove it. Just next door, Grundy County is one of the poorest in the nation. It used to be home to the Chickasaw and then the Cherokee, which were two of the so-called “Five Civilized Tribes,” “civilized” meaning they cooperated with the U.S. government. The U.S. forced them out, anyway, by the Indian Removal Act in 1830. Native Americans, Europeans, the rich and the poor have been fighting over this bit of land for centuries. All the while, weeds and trees and flowers have been strangling each other for a piece of the same rich soil. One day, after having lived in Colorado for several years, I was washing dishes and looking across the street to the irrigation ditch. The neighbors’ rosebushes were practically climbing through the fence to get to it, and I finally knew what to say about Tennessee.

What has been your greatest writing life moment so far?

I’m going to cheat and tell you about two moments, because they seem related. An old friend and mentor of mine, Marilyn, is almost always the first to read my poems. She’s super supportive and genuinely enjoys them. I wrote a poem called “In October” last year, and sent it to her. She asked me, “How did you know just exactly how I was feeling today?” In another exchange, she told me she’d shared a few of the poems with someone I don’t know, and that woman was inspired to start writing again after a long hiatus. I’m not likely to become famous. There will always be someone ahead of me. But to make even one person feel seen and important is so gratifying.

What is your favorite piece by another writer from Issue Deux and why?

My favorite has changed at least three times since the issue came out. At first it was “America as a Room,” by Cassandra de Alba, because it feels true and original. Then Amber Atiya’s “everytime I speak, my gums bleed” punched me in the gut. But for now my favorite is “Almost Someone Coming Home.” Alexandra Smyth is some kind of magician. She’s put a whole lifetime in eighteen soft-spoken lines.

What are you currently working on?

I’m trying to find a publisher for a children’s book I’ve written. I lived on an island when I was very small, and I’ve always found the ocean’s rhythm to be the best lullaby. When my first child was born, I knew I wanted to write about it. Children’s book publishing is completely new territory for me! There are things like illustration to consider; I’m an artist, but I’m not sure if my style is the best fit for the story, oddly enough. Plus, how are people going to react if the book does get published, and I continue to swear and write about sex in my poems? People in this country like to pretend that maternal instincts and sexuality are completely antithetical. They DO realize how babies are made, right?

Who/what is your favorite Alice/Alyss?

I really love Alice from Resident Evil. She is saving the world from her own mistakes. And she makes me feel brave.

This is weed country. Not sticky pocketfuls of buds; the lush pot fields have just been burned by the Feds in a fit of irony. Besides, the locals brew up stronger kinds of numb. These are the kinds of weeds that
would shoot out of sidewalk cracks if this town could finance public sidewalks, and in the absence of
sidewalks, choose to choke ditches instead. Everyone here in some stage of not yet or no longer
belonging. Crowded Cherokee crowded out Chickasaw; Five Tribes uprooted and given a garden plot
Now people who look like me practice poverty in this rich land. The money for rosebushes ran out
somewhere west on 64. Here one of the 2 banks in town will charge you money for not having enough
money. 23 years at the Piggly-Wiggly or moonshine on the side of the highway, white rag waving in the
night. But say you made it, say you’re kudzu climbing the overpass, emerald ambition. Say you own all
the hardware stores for 3 counties. Every lawn mower starts with you. Everyone needs a lawn mower
for the weeds.